As the world’s major economies, EU and China regard hydrogen as an important opportunity for the energy transition at a time when the world is in a combined effort to deal with climate change and achieve carbon neutrality. In this context, China Hydrogen Alliance Research Institute and the European Union Chamber of Commerce in China jointly held the China-Europe Workshop on Hydrogen Industry in Suzhou, Jiangsu Province on June 29. This Workshop was also part of the 2021 International Dialogue on Energy Transition of the National Energy Administration, the annual leading event of the China-Europe Energy Technology Innovation Cooperation on Hydrogen.

Established scholars and representatives of leading enterprises from various fields of systematic cooperation in production, learning, scientific research and practical application in China and Europe discussed on the topics of “renewable hydrogen strategies and policies, technology and communication, comprehensive application and demonstration projects of China and EU aiming at carbon neutrality”, and explored the industrialization model of China and Europe in hydrogen, especially in renewable hydrogen to establish all-round, multi-level and wide-ranging international cooperation in hydrogen.

Wang Xiang, Member of the NPC Standing Committee of the Suzhou Municipal Party Committee and Executive Vice Mayor, Xu Ziming, Director of the Department of Technology and Equipment of the National Energy Administration, and Bettina Schoen Behanzin, Vice Chairman of the European Union Chamber of Commerce in China, delivered speeches respectively.  The opening ceremony was presided over by Liu Wei, Secretary General of the China Hydrogen Alliance. 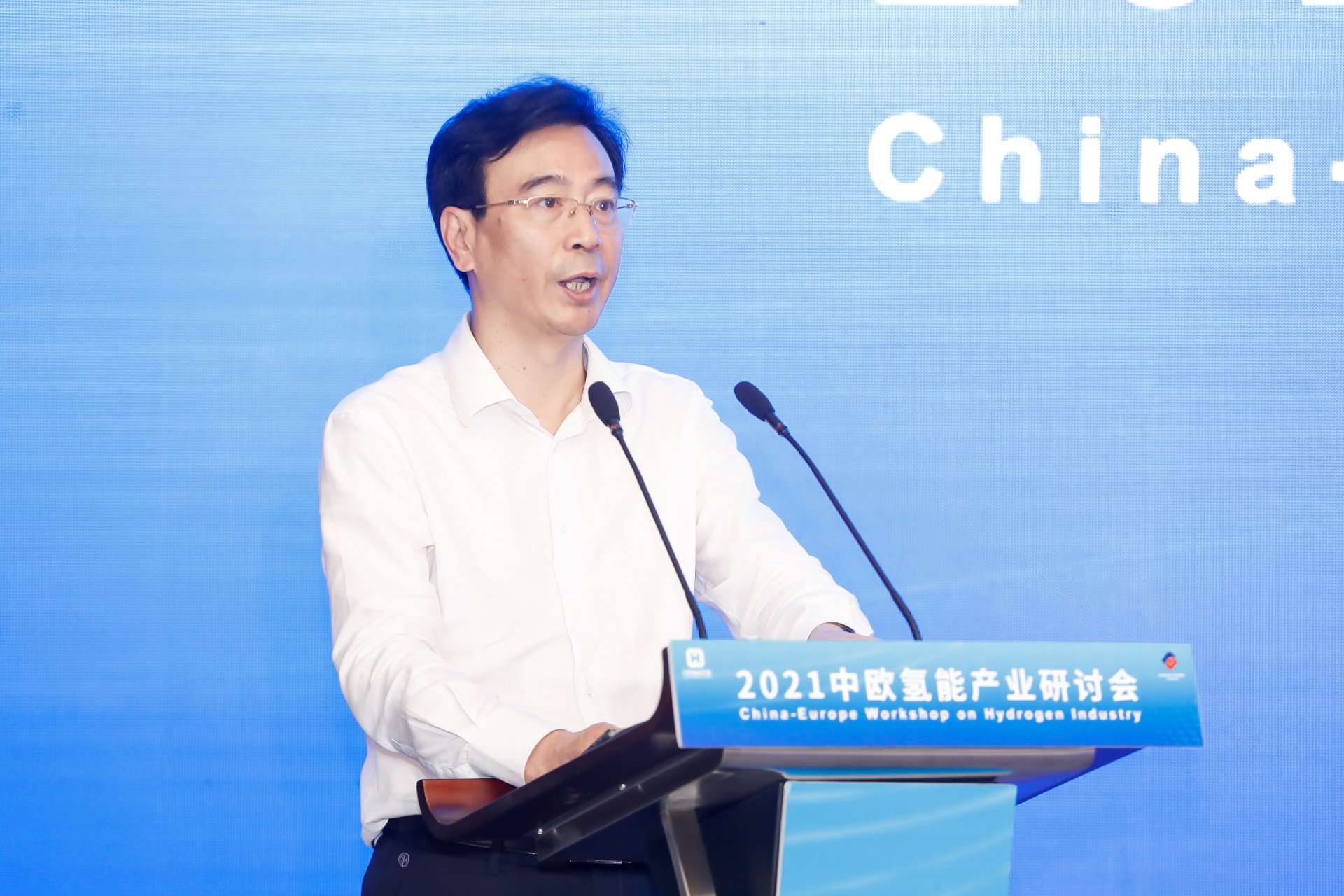 Suzhou City attaches great importance to the development of hydrogen. It is planned that the output value of hydrogen and fuel cells of Suzhou will exceed RMB 100 million by 2035. 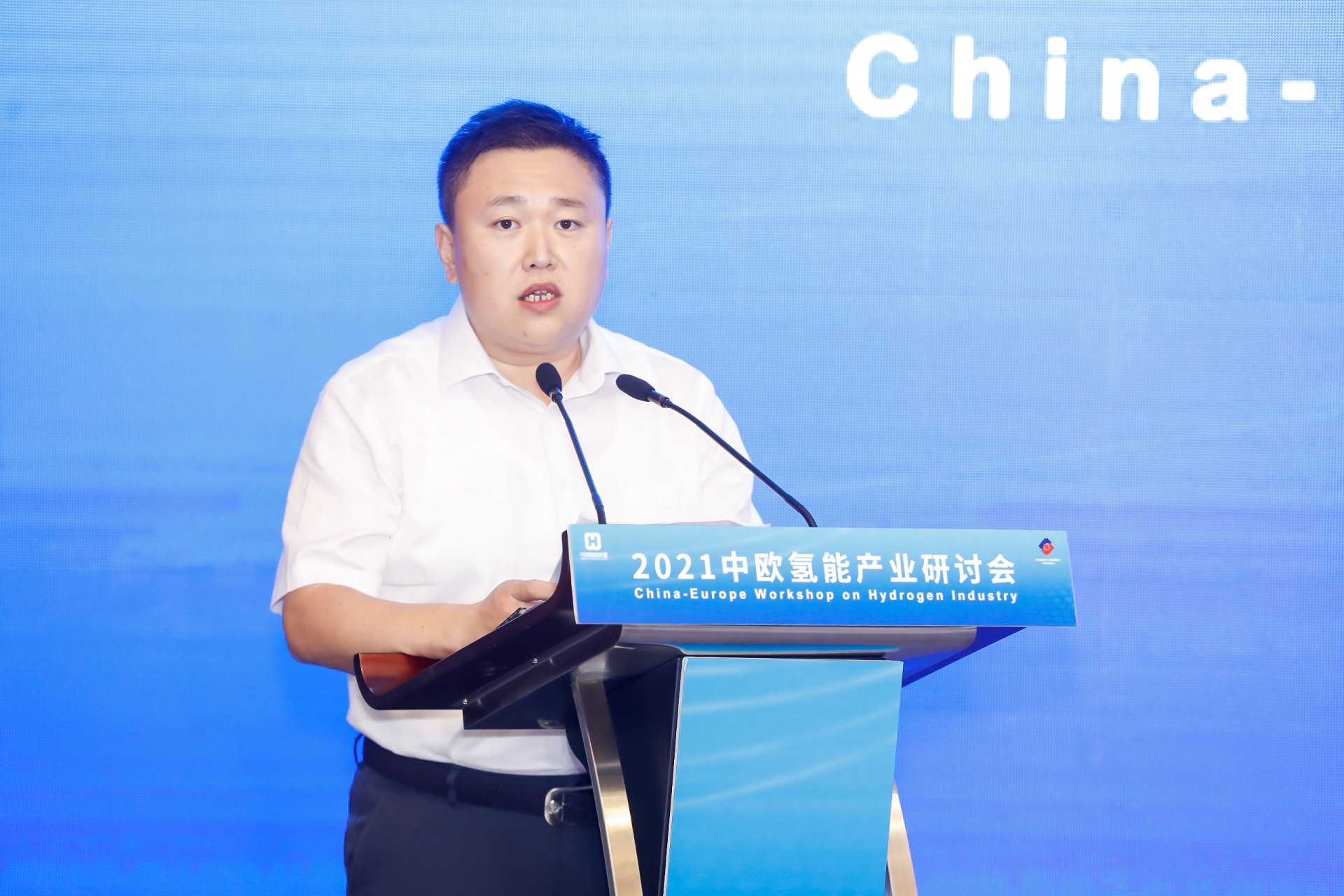 Xu Ziming, Director of the Department of Technology and Equipment of the National Energy Administration

As partners, Europe and China are highly cooperative in dealing with climate change and energy transition, and are highly complementary in clean energy and industrial manufacturing, with great potential for cooperation in hydrogen innovation. 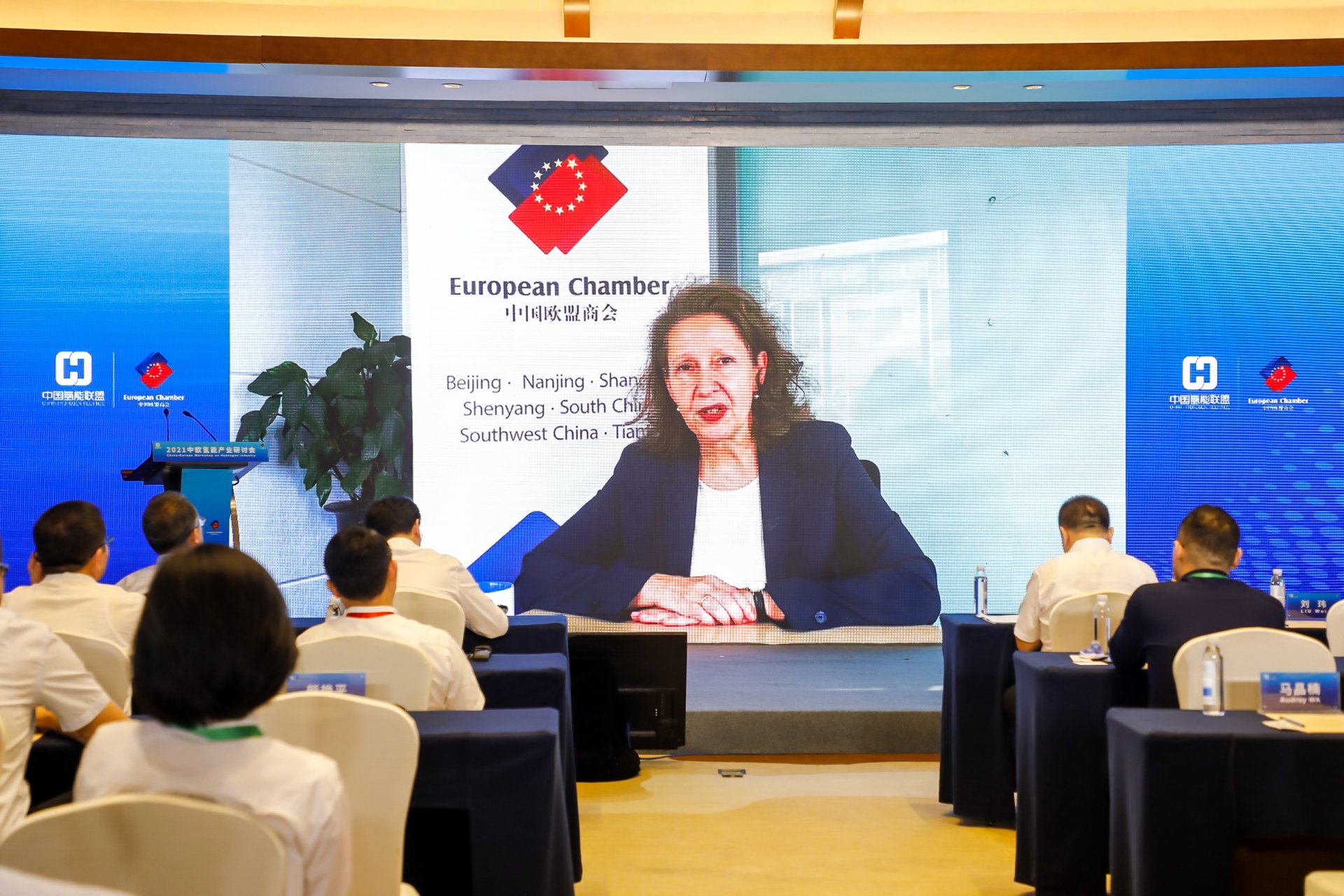 It is an honor to co-host this event with the China Hydrogen Alliance. On this event, we look forward to building an open technology and industry exchange platform under the theme of hydrogen, and our goal is to help promote China-Europe cooperation in the field of green hydrogen and fuel cells.

Ms. Ma Jingnan, Vice President of REFIRE, was invited to the workshop and delivered a keynote speech on the Exploration on Fuel Cell Commercialization. 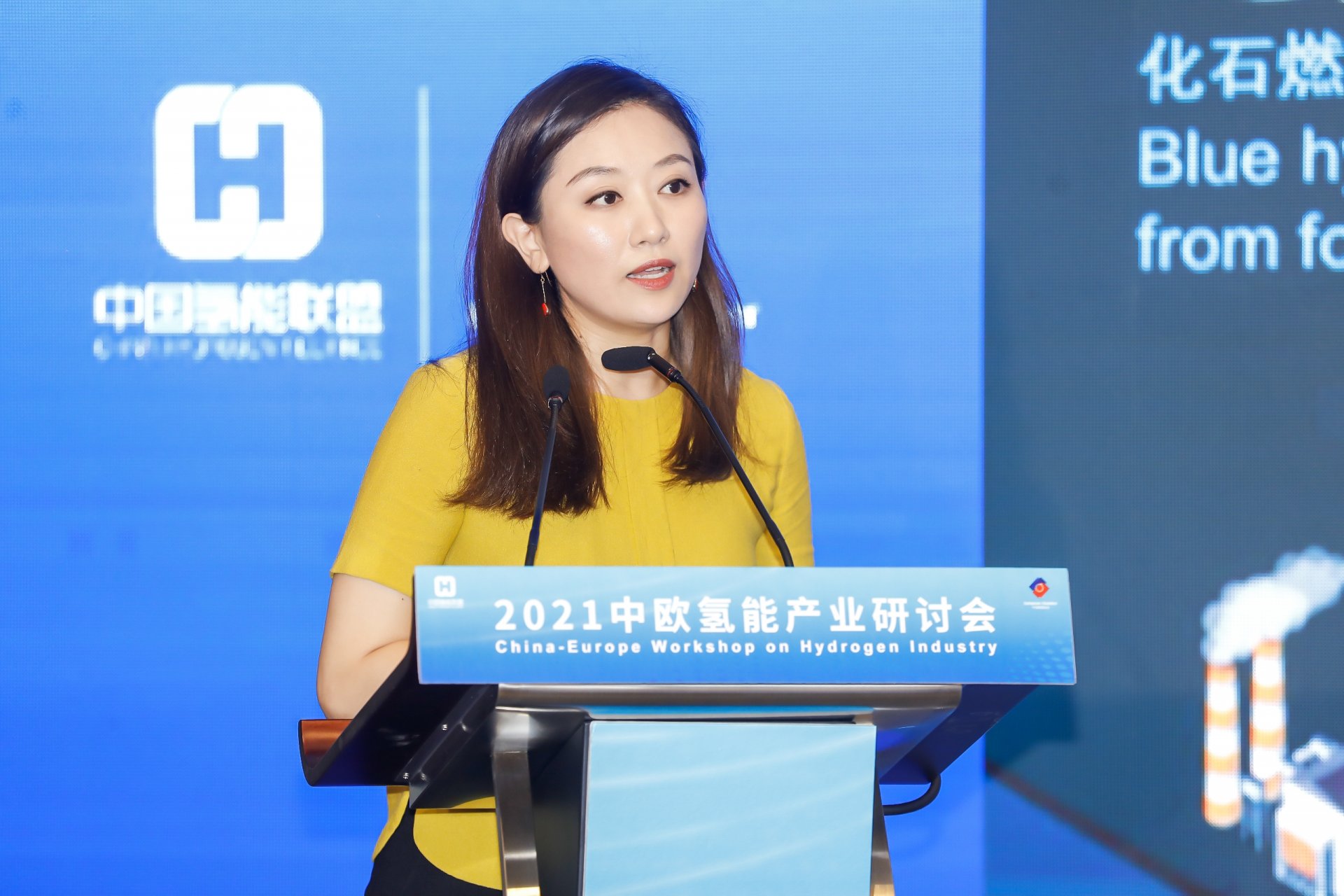 We look forward to working with our industrial partners in China and Europe to promote the large-scale development of fuel cell technology and explore diversified commercial applications, and contribute to global carbon neutrality.

Ma Jingnan introduced in her speech that REFIRE, as a fuel cell system enterprise, focuses on the R&D of fuel cell technology, as well as the R&D, production, sales of fuel cell system related products, and services for fuel cell engineering application development. Since the establishment, the fuel cell system products developed and produced by REFIRE have been applied to a variety of heavy trucks ranging from 18t to 49t; REFIRE has played roles in multiple service scenarios such as urban construction, cleaning and transportation, with its products and services sold to and provided in 17 provinces and cities in China and exported to the United States, Japan, Germany, Switzerland, and Malaysia.

With the application scenarios of fuel cell technology increasingly diversified, REFIRE recently launched a new 130kW high-power fuel cell system—PRISMA XII+, which not only meets the higher requirements for the durability, reliability and safety of the fuel cell system under different operating conditions, but also achieves a significant reduction in system costs through localization and technological advancement.

Ma Jingnan said that in the process of meeting the increasingly diversified application scenarios and increasing market demands, the main tasks of current development are to build infrastructures based on scenario requirements, develop and validate sustainable business scenarios, and achieve breakthroughs in key product technologies. She also mentioned that REFIRE has been exploring the construction of a hydrogen application ecosystem in recent years and plans to seek for cooperative partners of the ecosystem in Europe in the future, expecting to work together with Chinese and European partners in the industry to promote the large-scale development of fuel cell technology and explore diversified commercial applications. 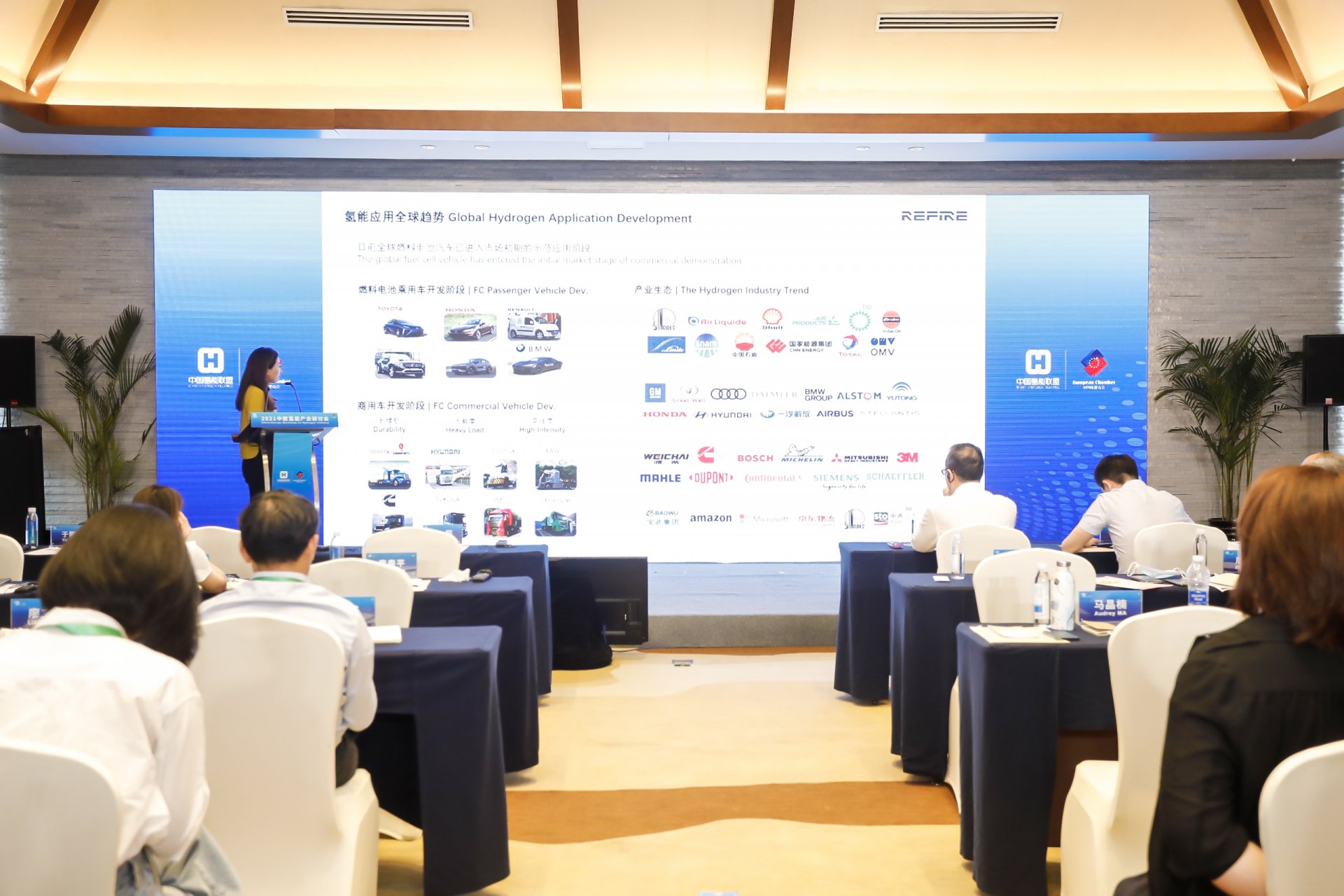 In addition, the China Hydrogen Alliance and the International Renewable Energy Agency (IRENA) jointly released the Chinese version of the Green Hydrogen Cost Reduction at this workshop, and had a round-table discussion on the topic of “China-Europe Cooperation in Promoting the Development of Renewable Hydrogen”.

This workshop has been successfully concluded, but the technology development and cooperative application in the field of hydrogen and fuel cells between China and Europe will continue. REFIRE will also actively deepen partnerships in the hydrogen industry chain, and contribute to the development and progress of the global industry chain and the realization global carbon neutrality.